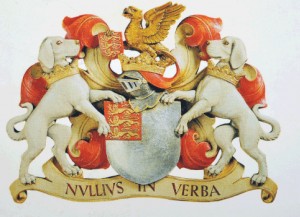 This past weekend I had the pleasure of being a scholar in residence in Congregation  Keneseth Beth Israel in Richmond, Virginia. Among the topics I discussed was an article I had written on Judaism and Darwinian Evolution. That paper appeared over twenty years ago, and a good part of it is devoted to discussing the conflict between science and religion in general and Judaism in specific. In my lecture, I took the opportunity to revisit the topic and wondered what, if anything has changed over the past two decades.

My trip coincided with my having just finished reading a biography on Isaac Newton by James Gleick. Newton lived in the age when science was being invented, and one could argue that he was not only the greatest scientist of all time, but also the very first.

In the margins of his early notes, which he titled Quaestiones Quaedam Philosophicae [Certain Philosophical Questions] (c. 1664), he wrote:

I don’t think that for most religious people this statement would pose any problems. Certainly, the majority of Jewish thinkers feel that they are searching for truth, and Newton himself, an extremely religious person, clearly had no problem reconciling his scientific exploration with his religious devotion.

Newton belonged to an organization of scientists called The Royal Society, which was founded in the mid-1640’s. With Galileo’s telescope allowing man look farther than he could have ever imagined, and Robert Hooke’s microscope, which let people peer into the invisible tiny world, the age of experiment commenced. The Royal Society adopted as its motto “Nullius in Verba” –“on the word of no one” or, “trust no one else’s word”– and what they sought above all was “the determination to withstand the domination of authority and to verify all statements by an appeal to facts determined by experiment.”

This notion, I believe, would be at odds with many religious outlooks, and certainly with Judaism and the emphasis it places on tradition. After all, we are a faith-based ideology, and we do very much trust the word of others. We study the Bible, the Talmud, the interpretations of those works by generations of rabbis, and we look to those words not only for specific information, but also as inspiration for a spiritual life and as a guide to how we should strive to act, what we should believe.

And so, there is an inherent tension between the cold skepticism of the scientific method and religion’s willingness to accept ideas based on faith. Tension turns to conflict where there appears to be a discrepancy between scientific truth and religious dogma. The flashpoint that seems to draw the greatest attention is evolution, with its assertion that the world has been around for a much longer time than a simple reading of Bereishit (Genesis) would suggest, and with its proposal of a mechanism for understanding how all life – including man – developed to such a fine degree of complexity without turning to a Designer – God – as explanation.

Religious thinkers tend to address the challenge from evolution in one of three ways:

Each of these positions has been exhaustively discussed and written about, and debated around the dining room table, in coffee houses and on the BBC, by scientists and philosophers, by atheists, rabbis, priests, imams and gurus.  It strikes me that many if not most religious people have found some sort of a modus vivendi and that the problem no longer seems as pressing as it once did.

I recently had the opportunity to discuss this with Rabbi Shabtai Rappaport, the head of Bar Ilan’s Institute for Advanced Torah Studies Beit Midrash. He too felt that the debate has become somewhat passé, and said that he believes the relationship between Science and Torah has moved to a different stage. The age of conflict is more or less over. People have made peace, one way or another, with the issues. Now, he said, we can move on to the much more interesting, exciting, and fulfilling phase where science can engage with Torah in a constructive way. He told me that the University is filled with researchers and professors, and each has made some fundamental discovery of a new idea, a new physical, biological, psychological property. Every one of these new discoveries can and must lead us to greater understanding of some idea or principle within the Torah, to some deeper perception, maybe by example or symbolically, of a halacha (law), a midrash (homily), a posuk (passage).

One professor of Sociology and Economics, for example, studied gender differences in the workplace in terms of how the prioritization of workflow demands unconsciously reflects the character that people seek to project about themselves. The results surprisingly helped Rabbi Rappaport understand a seemingly unrelated matter, namely the reasoning behind a difficult ruling given by Rav Moshe Feinstein in a case involving a disputed inheritance where a stepmother hoarded money intended for the children under her care.

Rabbi Rappaport sums up this refreshing perspective: “New Torah thinking should be born of every scientific discovery.”

Perhaps, twenty years after I wrote my paper, the ideas are less relevant in terms of settling the conflict between science and Torah. Rather, I would emphasize the parts that challenge us to search for ways that Darwin’s theories can help elucidate concepts and values within the Torah.

And it makes me wonder what the next phase in terms of the relationship between Science and Torah will be twenty years from now.