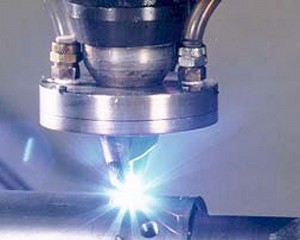 Jews love to recite blessings. We have a blessing to thank God when we wake up, when we put on our clothes, and of course before we eat – with a specific benediction for each category of food. Spices and fragrances have their own blessing as does viewing the first blossoms on a tree, strange looking animals, a rainbow, and a host of other phenomena and events. One blessing is recited when hearing good news, and another when hearing sad tidings. A meticulously observant Jew tries to make no less than one hundred blessings each day!

One explanation for this obsession with blessings is the attempt to introduce an element of spirituality into even the most mundane of circumstances. Perhaps an even more important take-away from all these blessings is that it teaches us the importance of saying thank you.

This leads up to the dilemma in which I found myself during the course of my doctoral work. We had proposed a new type of carbon monoxide laser. CO had been used before, of course, but the schemes were complicated, often involving supersonic flows and pieces of jet engines and the like. Our design was to be compact and relatively simple. (Relative is a relative term, so one might consider waterproofing an ice-cream freezer and filling it with over 1,000 quarts of anti-freeze simple.) The preparations for the experiment took months and included the occasional soaking with minus 20-degree liquid. (We learned that standard O-rings don’t seal well at low temperatures, something we should have picked up on after the tragic NASA Challenger disaster.) Through the optimistic eyes of a young graduate student with dreams of changing the world, this seemed to me an experiment of the utmost significance, and I was brimming with anticipation.

And so, as the laser was almost ready and the test day approached, I went to see my teacher Rabbi Aharon Lichtenstein to ask if there was a special blessing that should be made on a scientific discovery. Should it be the one recited when observing a wondrous natural phenomenon such as lightening – “Blessed is He who created the wonders of nature?” Or perhaps, since this was a discovery first observed by scientists, the proper blessing would be the one made when seeing a great intellectual – “Blessed is He who has given wisdom to flesh and blood.” Maybe some kind of mixture of the two blessing would be most appropriate.

With a soft voice that could cut like a razor, Rav Aharon responded. “I am confused. Are you looking to make a blessing praising how smart you are?” No! Of course I don’t mean that. I am looking to celebrate the scientific endeavor where man becomes partner with God in unlocking the secrets that He has hidden in the natural world. There are amazing, marvelous, almost miraculous phenomena that are buried like treasures deep down in God’s universe, but they would remain forever concealed if not for the tenacious exploration of the laws of physics – and yes, the cleverness, of science and scientists… is what I should have said… But instead, utterly deflated, I stumbled to find an answer, and meekly agreed that it might be best just to recite the standard fallback “Blessed is He who has granted us life, and sustained us, and allowed us to reach this occasion.” A bit of a letdown, but if that text can be said when putting on a new shirt, it can certainly apply to an experiment which is the culmination of six months of preparation.

I thought about that episode this past week as I stood in front of the boxes that had just arrived from our publisher. What blessing do you make when you see your book in print for the first time? Twenty years later, I realized what Rav Lichtenstein was trying to tell me. Blessings are not things to be taken lightly. Think hard about what you are really saying. Is it truly an expression of gratitude to God or is it ultimately self-serving? Not to mention that blessings, and curses, often come in disguise. As I opened the box I recalled the ancient Jewish tradition that distinguished between the written law (the Bible) and the oral law – all other knowledge that was prohibited to be put to pen. Only God, I thought, can write a perfect book. Everyone else will inevitably find some fault with their handiwork, and if they don’t some reviewer will!

As I took the book out of its package, I murmured to myself somewhat apprehensively, “Thank you God for granting me life, and sustaining me, and allowing me to reach this occasion.”

4 thoughts on “The Blessing on a Scientific Discovery”