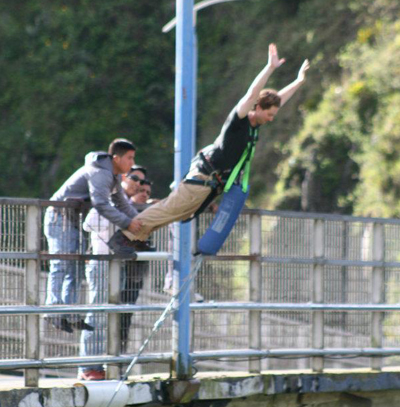 I can’t imagine doing what my son, Yair, did in the picture. Bungee jumping off a bridge over an Ecuadorian gorge hundreds of feet deep is incomprehensible to me. I could barely muster the courage to accompany another son, Gilad, on Treetop Adventures near Turtleback Zoo. Balancing on a rickety bridge a few feet above the soft ground (albeit securely holstered) seemed as daunting as walking a tightrope across the Grand Canyon. My fear of heights was outstripped only by my fear of being forever labeled a wimpy dad. 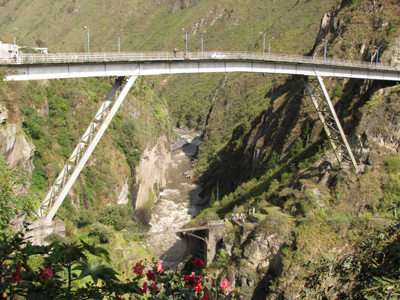 But in life, sometimes you have to be willing to take a leap of faith that is not always justified by rational arguments, in order to accomplish important things. Years ago I attended a convention on the nascent topic of computer telephony in Paris. It was a great opportunity to learn about the new technology and spend a romantic weekend with my wife Judy. I listened to a lecture by Jonathan Rosenberg, author of the SIP protocol, now widely used for shuttling voice across the Internet but then, just an obscure proposal. An idea hatched in my mind while he spoke and I grabbed him later for a cup of coffee where I asked if it might be possible to bridge between this new scheme and the tried and true method for authenticating users known as RADIUS. Jonathan told me that he thought it might work and suggested that I submit a draft to the IETF. OK, I thought, and enquired as to when the next deadline was. “Tomorrow,” he replied.

The IETF, or Internet Engineering Task Force, is the body that creates the Internet. Not the physical wires and computers that modulate voltages as data packets, but rather the IETF defines the higher level of interpreting that data. Protocols are agreed upon rules so that someone creating a web page in Singapore can be sure that a web browser running on a laptop in Des Moines can accurately read and display that page faithfully. The IETF is an incredibly democratic organization. Anyone can submit a draft proposal for a new protocol or an extension or change to an existing one. Technologists will then discuss the pros and cons of the idea and offer their suggestions. The most relevant drafts are debated at periodic meetings of the IETF (anyone can attend) and a very few eventually end up as an official Request For Comment, a de facto acceptance and recommendation that the scheme be implemented. Examples of RFCs are the language of the web, HTML (RFC 1866), email (Post Office Protocol – POP-3, RFC 1081), and the important Hyper Text Coffee Pot Control Protocol – RFC 2324.

Now keep in mind that I was a complete novice to Internet telephony, and had hardly heard of the IETF or read a draft or RFC, let alone ever dreamed of submitting one. I went upstairs and told Judy about the conversation and her simple words “go for it” made me realize that I had nothing to lose – other than professional ridicule. So I stayed up that night and worked out the scheme, organized my arguments, learned the proper syntax and format for submission, and wrote the draft. The next morning, with a few minutes to spare before the deadline, I submitted the proposal. The idea was banged around a bit over the next years with a couple of people from around the world making key suggestions and alterations, but eventually it made its way through the system and now stands as RFC 5090. This was an important step in my career and every once in a while when I introduce myself, the question-response will be – “Oh, from the Sterman-RADIUS extension?”

The Rarest Blue is another example of something that would have remained a great idea had it not been for a completely irrational leap into uncertainty. Judy and I are avid fans of the world-history-in-a-topic genre and have read countless books on the influence of everything from coffee to mosquitos to the screw to the watch on the development of culture, politics, and technology. But we always felt that the story of tekhelet was at least as good a tale as any of those. We finally decided to write it up – our first book – with absolutely no idea what was in store for us. The rest, as they say, is (world) history.

Sometimes you can overthink an option ever so carefully weighing the odds of success against the risks of failure. Über-deliberation can lead to a paralysis that is mistaken for caution, and that, in the end, will lead to regret. Maybe bungee jumping is not the best example, but life is too short to miss opportunities just because the odds are that you won’t succeed.