I have been a strong supporter of the Ptil Tekhelet Foundation and of their efforts to revive the mitzvah of techeles for many years. The topic of techeles is one worthy of serious study by all who are committed to halacha, and the Sterman’s book, The Rarest Blue, presents the subject, in all its many facets, in a comprehensive and engaging manner. It was a pleasure to read!

The dye derived from shellfish undergoes a miraculous transformation. The solution, produced from Murex snail glands, begins as a muddy yellow, but when wool soaked in it is exposed to the air, it turns a brilliant, indelible blue or purple. It is no wonder that this process was guarded so fiercely and kept secret so effectively that it was lost to history. Sterman and his colleagues sought to resurrect the ancient practice of shellfish dyeing in an effort to restore the Jewish tradition of tekhelet, the blue strings, colored only by dye from Murex snails, that hang from the corners of prayer shawls. From there, Sterman’s expansive and fascinating microhistory covers the historical importance of the dye, the closely guarded manufacturing process, controversies over fraudulent versions of the color, the chemistry behind the dye molecule, the events leading to the rediscovery of the dye process, and even the physics explaining the rarity of the color in nature. Although Sterman tackles a broad range of topics, his emphasis on Jewish traditions and ancient practices keeps it centered and illuminating.

The Rarest Blue is a fascinating journey that takes the reader back in time, offering an exciting and thorough overview into the ancient world of dyeing, in general, and of dyeing the techelet, in particular. It tells the story of the re-discovery of the murex snail which is, at least according to the Sterman’s, the source of the ancient blue. To properly explore the world of techelet, one is taken on an exciting adventure into the world of Torah, archaeology, art, chemistry, and history, which The Rarest Blue so gracefully does…

The Rarest Blue is simply delightful. The material is crisp and clear – it reads incredibly smoothly and beautifully. Even the chapter on the physics, biology and neurology of techelet-making can be understood by someone like me who never passed tenth grade science.

– Rabbi Ari Enkin, Author and Editor at Torahmusings.com
The full review can be found here.

“A story of science and religion, of craft and history.. The Rarest Blue is spellbinding, each page a revelation. In lovely, engaging prose, the Stermans reveal the rediscovery of snail indigo—a detective story with cultural origins and a spiritual ending. A wonderful book.”

– Roald Hoffmann, winner of the Nobel Prize in Chemistry

“An amazing tale of historical sleuthing, told by a true storyteller who manages to capture both the drama and the magic of the quest for Biblical blue.”

“Traditionally, white symbolizes purity, and blue, the color of the heavens, represents, holiness. The white combined with the blue tekhelet conveys the message that a mortal can indeed achieve a state of holiness, and the tekhelet string points the direction to a truly spiritual life.”

“Bucking the unfortunate contemporary trend of specialization, The Rarest Blue is truly a multi-disciplinary story. At its most basic, it represents and employs a genuine fusion of Torah and Science, accessible and useful to both scholar and layman. But beyond that, it spans a rich spectrum of disciplines in the realms of science and the humanities as it tracks a historical saga across many generations. The Stermans have done a masterful job in relating this captivating tale.” 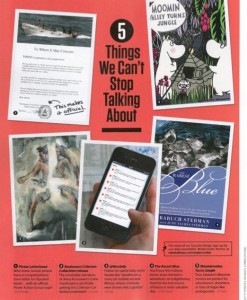 You’ll love this Indiana Jones-style chemistry adventure: an enlightening hunt for the lost source of history’s most valuable dye.