What has been will be again, what has been done will be done again; there is nothing new under the sun.   (Ecclesiastes 1:9) 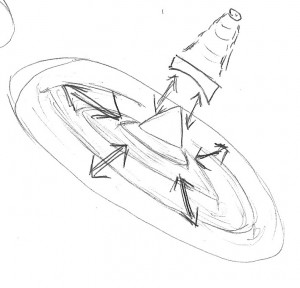 One of the courses that I took during my first semester in grad school at Columbia Engineering was an introduction to lasers. The professor was a world-renowned expert in free-electron lasers but not the most interesting orator. At one point during one of his lectures my mind started to drift – but not too far from the drone of his voice monologueing on about Bragg diffraction – and I came up with what I thought was a brilliant idea for a new type of optical cavity. In a laser, the light bounces back and forth between mirrors, and the configuration of those mirrors – the optical cavity – is a key part of laser design.

So after class, I went down to talk to the professor in his office and started to sketch out the idea that I had – a crude diagram like the one in the picture. Basically you have a disk that has a regular pattern etched into it – like concentric mountain ranges around the center. As light spreads radially outward through the disk, the mountains will set up a gradual reflection that will channel the light back towards the center. The cone in the middle is a mirror and will bend the light up to a second mirror, which reflects the light back down to the cone and out to the disk again. Viola. (Actually, my intuition told me that due to the radial symmetry, the pattern on the disk should be a Bessel function, but my math skills were – and still are – too meager to validate that.)

His response hit me like a pin to balloon animal. “Listen Baruch.” he said, “There have been many, many smart people that have thought about this before you. Anything you will ever think of – they have already come up with.” Deflated tail between my legs, I scampered off and kept my mouth shut for the rest of the semester.

Years later, I had the great honor to work on my doctorate under the maverick and incredibly creative Shaul Yatsiv. I recounted this story to him once and with typical laconic Israeli hutzpah he remarked, “your teacher was an idiot.”

I have come to realize that innovation has something to do with knowledge – but not all that much. The key to creativity is making connections between pieces of knowledge in unique ways. The more you know, the more raw material you have available – but the ability to relate different pieces of knowledge to each other, to abstract ideas, extract essential factors and compare those between disparate facts and experiences – that is something that can be done by any creative mind.

The words of the venerable preacher quoted above, “there is nothing new under the Sun,” may be true on a certain level. The basic human condition has changed little in the three thousand years since that sentence was written. It is remarkable how the preacher’s remarks regarding our fears and anxieties and frailties and ambitions are as true and relevant today as they were in that far away land and distant time.

But, in my opinion, that is not the whole story and is, in fact, a pretty pessimistic representation of things. There are a lot of new things under the Sun – and in the last century above and beyond the Sun as well. Even if you argue that they have always been there, that the laws of Nature have been around for billions of years – there is still the little matter of discovering them and understanding them, let alone applying them to making things like transistors, lasers, the Internet, or an iPad (not necessarily in order of importance).

Moreover, every day brings new experiences and the potential to make those new associations and connections that lead to innovation. Anyone can innovate, all that is required is the hutzpah to put your ideas out there and the willingness to risk getting pin-pricked – which is especially painful if it is by someone you respect.