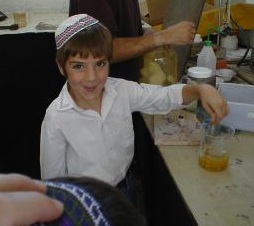 As far back as I can remember, I always loved science. I would read popular books on different science-related topics like Isaac Asimov’s essays or Broca’s Brain by Carl Sagan. My favorite movie was The Andromeda Strain and I dreamed about working in a high-tech laboratory with lasers and test-monkeys and vacuum-sealed air locks. The first time I actually learned any real science was in my first year at college (having spent the four years of high-school in a teacher-induced intellectual coma).

My first year physics teacher was a young graduate student who I thought was brilliant, and he introduced me to Newton and vectors and electric fields. Towards the end of the semester, he called me into his office and offered me two pieces of advice: First, he suggested that I switch out of the college I was in and go to a school with a better program that included a physics major. Second, he advocated that I leave religion behind and stop practicing Orthodox Judaism, since every real scientist recognizes that religion is stupid.

I took his first bit of advice and went on to major in physics, eventually getting a doctorate in it. But instead of embracing his second suggestion, I have, to a certain extent, taken it as a gauntlet thrown down in front of me, as a life-long challenge. Throughout my years of education and into my career in science and high-tech, I have found that there are indeed real scientists who reject religion as superstitious, old-fashioned, and outdated. But there are also excellent scientists, engineers, and smart, deep thinkers who are committed to religion and who do not feel that one must renounce belief in God or devotion to a faith-based system in order to achieve intellectual honesty.

I think that there are many paths to truth, and I might even go so far to say that there are many legitimate truths. (I do not believe in moral relativism, though, and firmly think that right and wrong exist as absolutes. Highest among these absolute imperatives would be something along the lines of Hillel’s dictum that was adopted by Kant: “What you find unpleasant – don’t do to your friends.”) I also maintain that there is room for faith, even in the laboratory.

The question that can’t be avoided in terms of religion and science is does one have priority over the other. When faced with a contradiction between a truth held by religion and one asserted by science – which one wins? That is a question that I struggle with. It is not always a clear-cut directive that religion should stand down, even from an intellectual standpoint. The two great heroes in our book, Gershon Henokh Leiner of Radzyn, and Rabbi Isaac Herzog, were completely steeped in religious tradition and committed to it. Yet, though they embraced science and secular thought, they were not afraid to hold fast to the traditional position (in this case, the color of tekhelet) against all the “proofs” that science, archeology, and chemistry could muster. In the end, they were vindicated.

Intellectual struggle is not a bad thing. It keeps one from becoming smug and thinking that he is the bearer of absolute truth. And that is a bad place to be, whether you are a scientist or a believer, or both.